This workshop examines the interplay of environmental perception and the way different societies throughout history have thought about the future state of ‘nature’, looking at how they have narrated and mediated this form of ‘environmental imagination’. It has become a common strategy to conflate different time scales in environmental discourse. As Rob Nixon has recently argued, environmental activists, advocates, and artists use a form of “anticipatory memory” when warning about the effects of the ecological crisis, especially of climate change. Rather than merely projecting how things will turn out unless we change our environmental behavior, they often revert the perspective and look back on the present from an imagined point in the future. At this imagined juncture in time, the damage has already been done, resources have been depleted, biodiversity has dwindled, and wild spaces have turned into but dim memories. While these speculative environmental (hi)stories of the future have served as powerful narrative tools since at least the beginning of the environmental movement, it is less clear what kind of evidence or generic structure they are based on. Are environmental scenarios mere variations of “apocalyptic discourse” (L. Buell) or utopian fantasies, or are they scientifically informed? What role does environmental perception in the present play in imagining future nature(s)? In which way does environmental memory shape these imaginings? What are the historical precursors to this specific mode of environmental thinking? What kinds of knowledge systems were/are involved in outlining the future state of the world? Who were/are the main actors implicated in these projections, and what was/is their role in society? What kind of texts and narrative patterns were/are used to describe future environments? All these questions will be discussed in this workshop. 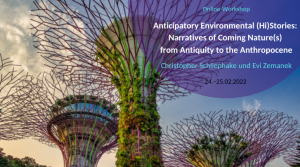