Extreme cold, sublime glow and a tremendous soundscape make up the sensual dimensions of ice, and have equally inspired science, art and technology since the 19th century. They generated the fantastic character of cosmological models used to explain the world, such as Hanns Hörbiger’s 1913 „Welteislehre“ (‘World Ice Theory’), which was largely inspired by the conquest of the North Pole. These entered the history of science and popular culture through a sophisticated, broadly-effective communication reaching out to experts and a broad audience alike. To this day, events such as the “Antarctic Biennale” of 2017 – which aimed to bring together a hundred „artists, scientists and visionaries“ on an expedition ship – bear witness to the close intertwining of polar regions, environmental research and arts.

Future knowledge and design are based – following the current trend in „ice research“ – on physical experience and its sensual communication to an audience. There is a fine line between objective-knowledge generation and emotional involvement for the purpose of communicating urgency. This tension has its roots in the 19th century. Inspired by the search for the lost “John Fanklin Expedition” (1845), Arctic panoramas, dioramas and theatre plays were created in Europe and the USA as spectacular productions in which science communication and entertainment were inseparably linked. Technical innovations, such as dramatic lighting to suggest an aurora borealis, caused the audience to be sensually affected by icy immersion effects that evoked direct participation in the polar expeditions. To this day, ice in climate-critical art and science communication serves as a strategy for a hybrid mode of reception that oscillates between emotional and epistemological participation. This results in a close collaboration between scientists and artists – or even artists and activists, as the 2007 action by Greenpeace (together with composer Enrico Enaudi) shows.

However, in exhibitions, expositions, popular theatre and popular media, ice and snow are also staged for comic effect. The humorous staging and portrayal of ice in comic book stories and animated film, for example, plays an important role in shaping cultural ideas of ice and public perceptions of the sciences associated with it. Since most people are not scientists who study ice and snow, these representations and depictions of ‘icy science imaginaries’ in popular culture are important vehicles of science communication.

The climate-critical communication of urgency thus goes hand-in-hand with attempts to generate and stage aesthetical evidence. The resulting proximity of art and science and its historical roots are central to this symposium and will be examined with a focus on mediating environmental knowledge in scientific and artistic performances as well as popular entertainment and media – comics and animated film in particular. 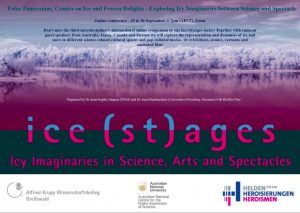